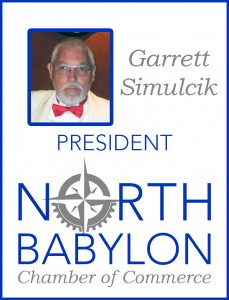 I find it hard to believe that the Chamber will soon be celebrating its first year Anniversary. Approximately a year ago the “core seven” met and adopted its By Laws and obtained its 501 (c) (6) status. From the beginning it seemed there was so much to be done and not enough time to accomplish everything we wanted to do. I had hoped to have 50 members join the Chamber in the first year and as it looks, we will be close or even surpass that number.

I would like to thank the current Board of Directors for the work they have put in. Their enthusiasm, ideas and energy that the board collectively has shown, inspires me.

Last spring the Chamber participated in two ribbon cutting ceremonies – North Babylon Wine & Spirits and Wax In the City. These two establishments are a great addition to the North Babylon community. The Chamber continued with the adoption of Weeks Road under the Town’s Adopt-a-Highway program. Here the chamber is required to several cleanups a year. One such cleanup is scheduled for April 16 starting at 10 a.m. Please set the time aside to join us in keeping North Babylon clean.

The Chamber also joined in with other communities groups and helped sponsor the Community Movie Night held at the Mansion in Phelps Lane. Unfortunately, the first scheduled showing was rained out and the re-scheduled evening was extremely cold. However, those that showed up enjoyed the evening and it was fun for all.

With the closing of Pathmark which affected many residents, especially those that live in Weeks Road Manor and Primrose Lane Condos, the Chamber was able to work with the Town of Babylon and secure busing for those tenants from these complexes to Sunset City Plaza to do shopping two days a week. This program allows the tenants to shop without having to walk across Deer Park Avenue.

The Chamber also has set up two Scholarships that will be awarded to deserving students in North Babylon starting with the Class of 2016. Thanks to all those that attended our recent fundraiser at Applebee’s, which helped support these Scholarships.

You may not have noticed, but in keeping with the program to keep North Babylon clean and green, several stores on Deer Park Avenue (north of Sunrise) with the assistance of the Chamber and support of the Town of Babylon, recently had several planters and trash receptacles installed.

As I previously stated – “The enthusiasm, the ideas and energy that the board collectively has shown further inspires me.” I cannot wait to announce the number of events that the Chamber has in the planning stages. So keep your eye and ears open to see what YOUR Chamber will be doing for everyone in North Babylon.

I also urge you to shop and support your local businesses as their success helps keep North Babylon Community a vibrant community.

In closing, I further urge anyone who owns a business, is part of an organization or a concerned resident to join us on the fourth Monday of the month at one of our General Meetings. Please follow our Facebook page or join our newsletter to see exactly where and when our monthly meetings will be held.

You have Successfully Subscribed!